Thanks to a tip by a contact in the apparel trade, I got in touch with a tailor currently located in Hollywood but who originally had a shop in Beverly Hills. Let’s call him Mario. Now he works out of a converted garage behind his home serving as his workshop. He is originally from the Basilicata region in Italy, next to Calabria.

From what I saw he cuts a straight shoulder but also appears to be flexible. For example, he showed a jacket with rounded jacket fronts, which a customer requested and is de rigueur on Styleforum, as well as a more traditional jacket front. Although he doesn’t do manica camicia, he showed a soft open seam shoulder jacket. 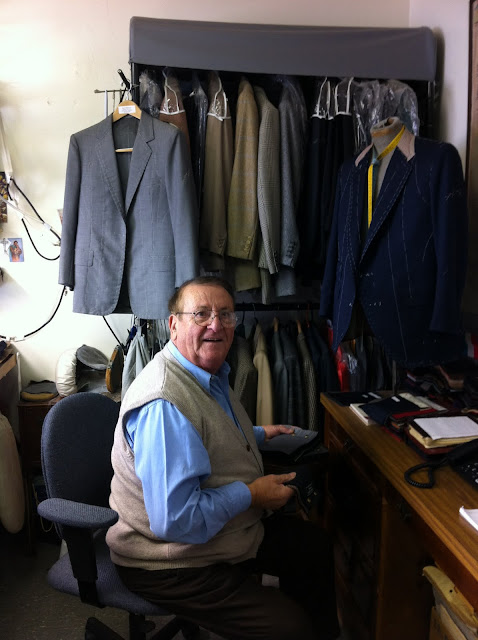 Most of his clients order from books but he is open to CMT which is priced by removing the estimated fabric cost. Hence a CMT sports jacket is priced very favorably, more comparable to MTM pricing in the US.

To my pleasant surprise, I saw a picture of one of his customers on the wall – a talented, prize winning concert pianist who also happens to be a friend of mine. I was surprised because I did not know he was a customer. When I asked my friend about it later, he said Mario made the best fitting dinner jackets and formal tailcoats (white tie) out of all the tailors he tried.

Mario was expecting a customer when I visited so I didn’t have time to clarify my next point, which is that he appeared to be semi-retired or limiting his work to existing clientele and referrals. Hence my caution about publicizing him without his consent.