I was also in Hamburg for a day and visited a couple of fine men’s haberdasheries. The first is Ladage & Oelke, which I first read about in Flusser’s Style and the Man. Below are some photos of their holiday displays:

L&O is worthy of a pilgrimage for its distinctive take on men’s clothing. What it does well is take the English city and country style and assimilate them in northern German terms. Think also American trad (or Ivy League style) meets the Baltic Sea.

My 2 favorite things about the store are its terrific tie selection (ground floor) and shoe department (second floor). The former is an American trad (and Ivy League) dream – knit ties in silk, cotton and wool and 3.25″ silk ties in conservative print and knit patterns (including animal motifs) made under the English labels Church’s and Atkinson’s.

Their shoe selection is extensive, as is their inventory (10,000 pairs in stock for men and women). They carry St. Crispin, Edward Green, Crockett & Jones, Alden, Wolverine, Carmina and Lendvay & Schwarcz (an Austrian sounding brand but actually made in Italy).

Braun is Hamburg’s Italian alternative to L&O, also covered in Flusser’s book. Unfortunately I visited after their closing time and leave you with just a couple of window display shots. 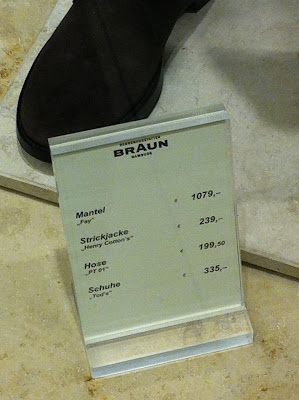 I also visited Berlin and will post photos shortly.