I recently had a great chat with newly minted hatmaker Stephen Temkin who launched his initial collection of hats under the Leon Drexler brand. Stephen is based in Toronto and launched his RTW and bespoke hat business earlier this year. If you’re serious about hats, be sure to check his guide to measuring your head to get the correct hat size. It’s probably the best one page description I’ve read anywhere of measuring your hat size.

Below is an excerpt from our interview:

What triggered you to start making your own hats?

People used to say that you go mad after making hats. Now I say you have to be mad to make hats. I started wearing hats 10-15 years ago purely from a functional reason – to protect my head. About 4 years I was looking for a birthday present for my wife. I saw a vintage fedora made by James Lock and was looking to refurbish it and put on a different ribbon. I took it to a milliner friend but she was too busy. Then I went to a place called the Hatter – one of the last places to clean your hat in Toronto and they weren’t able to do the ribboning. So I did the ribboning myself and my wife suggested that I be a hat designer. I got online and started looking and coming across guys like Art Fawcett making hats. I deliberated over several weeks, talked to other guys and got referrals. Over two years I put it all together.

It was frustrating since there is no manual. There is one book you can buy – a plastic bound reprint of a 1919 book called Scientific Hat Finishing and Renovating. Pretty much the only book written by a hatter. There are illustrations of tools down to the brand of the stuff I actually bought. I’m the only person in Toronto doing this – possibly in eastern Canada. Biltmore of course is the commercial hatter an hour east of Toronto and there are a couple of guys in Alberta who do cowboy hats.

What was the most challenging aspect of going into this business?

It was the learning curve. I used to be in winemaking and every winemaker has his own theory of making wine. Hatmakers are similar and each has his own theory. One guy says to pounce a hat for 5 hours, another guy says 5 minutes. It’s trial and error.

Would you recommend a person to get into hatmaking?

You can still do it. Some equipment might be difficult to get but a lot of things can be made for you. I went searching for hat blocks and two sets I bought in Germany. What’s hard to find is whole sets with similar styles in various sizes. There are a couple of block makers around and you can get new blocks made. At this point I may have blocks made for me. There is a guy named Mark DeCou in the US – a woodmaker who specializes in hatmaking tools such as brim cutters. Antique curling shackles can be hard to find.

I use a very heavy old electric tailor’s iron which weighs 17 lbs. I found mine at Canada Steam Iron. They had just two lying around and I picked up one of them. Nowadays everyone uses pressurized steam. Another thing is the old sewing machines for sewing sweatbands into hats, doing bindings around the edge of brims.

Let’s talk about ribbons. Is there a story behind how you acquired your old-stock French hatband?

Any hatmaker will tell you ribbons are an issue. They pretty much vanished in the late 50s into 60s. Ribbon manufacture went with it. There is a specific kind of grosgrain for men’s hat, which is a blend of cotton and rayon that imitates the look of silk. I found a guy in Germany who sold hat bodies to milliners and old stock hatband. He purchased his ribbon from a German hatter who closed a decade ago and wanted to sell his whole inventory. 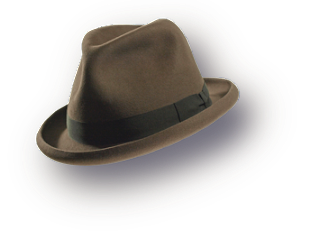 So I bought it all. It’s great stuff and you can really use the colors designed for men’s hats, which are neither overly bright or garish – subtle blues, greens and ivory-tawny colors. The other great thing about this ribbon is the level of sheen, which is subtle. Modern ribbon is too shiny.

The old stock hatband come in a little over 60 colors. In addition, I use a modern ribbon – a very fine pure silk (almost taffeta) made by Mokuba of Japan. For a black hat with black ribbon I suggest using this stuff because it is blacker. Black ribbon tends to look grey against black felt.

Where do you get your felt?

We’re all buying pure beaver felt from the same source – Winchester Company in Tennessee. They’re the only one in North America you can buy this stuff from. Even from Europe the choices are limited and they only come in 2 colors, brown or black.

Let’s talk about designing hats for women. How are they different than the male customer?

Because I don’t do millinery, it’s the same felt and basic shape. Where it changes for women is relative proportion. A woman would be open to a wider brim and you can think about trimmings in a slightly more flamboyant way. For me that would be a brightly colored silk ribbon or a slightly more conspicuous bow or an addition of a peacock feather.

I think the main reason was automobiles. It wasn’t until 60s that the automobile was something that everyone had. The development of suburbs also promoted the auto. People stopped spending time outside.Toronto has one of the biggest underground mall networks around. You could live in downtown Toronto in a condo and literally never go outside.

What sort of people wear hats these days?

Most of my customers are middle-aged men who wear hats, like hats and have trouble finding good quality hats. Some guys it’s their first hat.

What makes a hat charming is a certain amount of irregularity. Men used to bash their own hats, breaking it in. Only a good hat can stand up to the breaking in.

Who and what are your style and design inspirations?

Style begins with functionality. I’m really not into gratuitous fashion – I can’t even stand cargo pants. My approach to fashion is rooted in functionality and quality. I would say there is a certain amount of visual discretion. I approach hatmaking as an element of contemporary fashion. I don’t look at hats as nostalgic or ironic or celebrity imitation. I think about hats as a functional and good looking part of my wardrobe in a contemporary sense.

I talk about the style of my hats. Part of my idea is to help men to think about the language of hats. They should be thinking about hats in the same way they think about shoes or suits. Men’s style is a bunch of discrete decisions – 2 or 3 buttons, this or that collar. A lot of the look of the men’s fashion is the sum of small decisions. Hats are really a game of millimeters – small changes will really change the attitude of the hat.

A lot of men are shy about hats and think they don’t look good in them. Hats are close to your identity. So the thing to do is wear a hat that implies you and not something else. How discreet it looks is up to you. 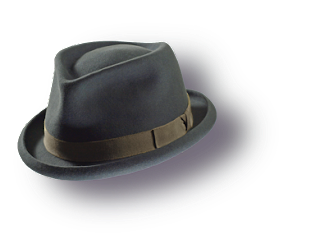 If hats are ever going to come back, then they have to be viewed as a kind of an authentic contemporary fashion rather than indicate something else, a bygone era. Rather they should indicate something I enjoy wearing. Once you start wearing hats it gets addictive.

For women it’s different – more ornamentation. Men don’t like the idea of wearing something as ornament.

I recently got a sewing machine to do bindings on brims for next fall, and some new blocks. I just made a new prototype hat for me. Some hatmakers make everything. I love the idea of being more niche.

1 thought on “Profile of a modern hatmaker: Stephen Temkin”