Despite the efforts of provocative designers such as Thom Browne and Kris van Assche, the contemporary Western male is largely conservative regarding color, pattern and cut. We are perhaps the logical culmination of the Great Austerity in men’s clothing that began with Beau Brummell’s simplification of gentlemanly dress in the early 1800s. Of course there have been periodic wavelets of experimentation around proportion or color – Oxford bags in the 1920s, zoot suits in the 1940s. But the long arc of men’s dress in the modern era has been riveted around the principle of sobriety.

At least it seems that way to me. When I began regularly visiting New York City a few years ago, I couldn’t help but notice the prevalence of black in the clothing of both men and women. Apart from summertime wear, the logic of dark, monochrome clothing seems firmly entrenched here and in other major American and European cities.

Based on this current trajectory, the sartorial endgame for men is a tightly bound view of clothing and style. Many of us refuse to wear a garment that stands out in some way – the double-breasted suit (too formal, unusual) or even peak lapels on single-breasted jackets. Many of us seem comfortable – perhaps too comfortable – with a wardrobe consisting almost entirely of single breasted jackets with notch lapels in two or three buttons. We tend to shun experimentation, remain allergic to changing our wardrobe and fixate instead on finetuning rules and formulae on a narrow set of issues – proportion, shoulder line and fit.

Against this backdrop, it’s difficult to imagine how a man today would ever contemplate wearing this large-scale tartan lounge suit (circa 1875): 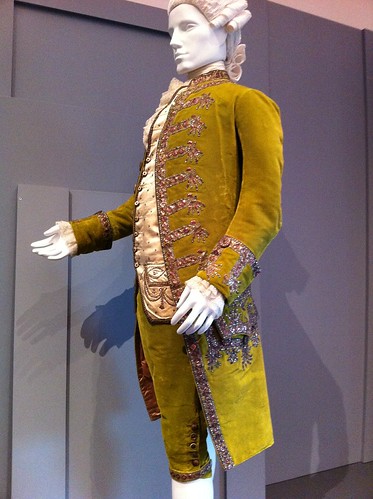 But wear these men did, apparently with pleasure and ease, and absent our modern anxieties. These photos were taken from the Los Angeles County Museum of Art (LACMA) exhibit called “Fashioning Fashion: European Dress in Detail, 1700-1915“. It’s an excellent overview of two centuries of European men’s and women’s dress. While you’re there, you might as well visit the new wing featuring works by Serra, Warhol and Eggleston.

Not that I’m advocating wholesale adoption of such historical artifacts. But I suspect most of us could benefit from a dose of experimentation, taking a peek every now and then over the sartorial horizon we’ve constructed for ourselves. Perhaps the rules we follow are just a means to an end rather than an end in itself.